The most beautiful female tennis players and social media

The year is almost done and we decided to do an article about the hottest female tennis players of this year and their following in social media. We tried to include all of our favorites and we hope that you like reading this article as much as we did writing it.

It is almost impossible not to fall in love with Angelique Kerber, she is a beautiful German tennis player who is at the top of her game at age 29. She is the prototypical European beauty and as you would expect from an athlete she was a great body as well. But Kerber is not only a jaw-dropping girl, she has had very big wins in her career, including two Grand Slam titles in 2016. But Kerber is also a champion in social media, where she has gathered a huge following. In Instagram she is very close to 400 thousand followers who admire her photos in hot tennis action. In Twitter Kerber has more than 300 thousand followers who read all her tweets, and in Facebook she has more than 800 thousand likes. Fans are always craving for more when it comes to attractive tennis players.

Cibulková is also a fan favorite that is a real delight to see on the tennis courts around the world. She was born in Slovakia 28 years ago and the best is yet to come for the tennis princess that makes her fans drool when she is playing. Dominika could be a model if she wanted to, but she has pursued a career in tennis and seems to be very good at it, she was ranked as high as fourth in the world. She can still keep climbing in the rankings and finally win a Grand Slam title, she is young and has the talent to do so. If you are a big fan of Dominika Cibulková you can bet on her in the next major tournament using the codes available at http://bet365.bonuscodeuk.com/. You can follow her on Twitter, Instagram, and Facebook, social media accounts that have huge followings.

Eugenie Bouchard is one of the prettiest and sassiest female tennis players on Earth. Also known as “Genie”, Bouchard is barely 23 years old, but do not let that fool you, she is an accomplished pro that has won important titles at the junior level and has already done great things at the highest level. We can be sure that we all love “Genie” and that is why she as a huge following in social media, Bouchard has more than a million followers on Twitter and she enjoys posting photos of her everyday life just like any other millennial her age. She is also on Snapchat, where she posts videos for all her young fans that are addicted to short video stories. On Instagram, “Gene” has 1.5 million followers, and she rewards them with all sorts of pictures about her daily routine. She is definitely worth following. 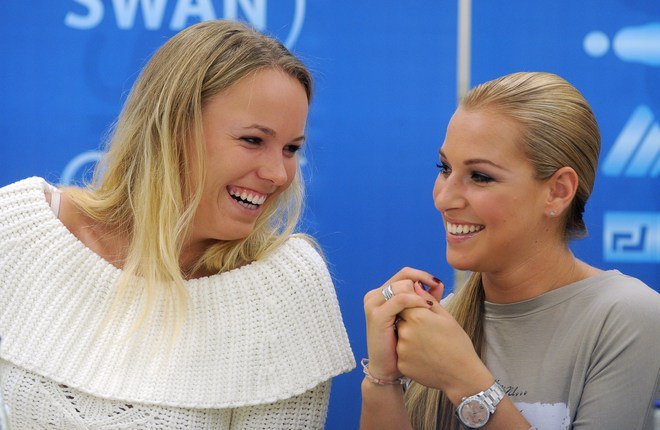 Wozniacki is one the best tennis players in the world, and that has made her famous around the globe. But her high level in the tennis courts is not the only thing that makes her stand out from the crowd, she is also the dream girl of many sports fans, and she just delighted them appearing in this year’s edition of the Sports Illustrated Swimsuit magazine. Caroline is still very young, and we say this because she has been playing great for a long time now and it is easy to think that she is older. The Danish beauty was born in 1990 and has one Grand Slam victory to her name, and that is something that most tennis players cannot brag about. As you would expect, Caroline is a social media phenomenon, she has 2.8 million followers on Twitter, 1.1 million followers on Instagram, and 1.5 million likes on Facebook.

Last but not least we have the Belarusian princess of tennis. Azarenka was born in 1989 and has already won two Grand Slams during her career and she is also an Olympic Gold Medalist, and that is quite a career for any tennis player. Fans from all over the world follow Victoria and her social media accounts are very popular, for example, on Twitter she has 1.1 million followers, on Instagram she has almost 600 hundred thousand followers, and on Facebook she has 1.5 million likes. Azarenka is less glamorous and uploads pictures that reflect a more laid back lifestyle focused on her family, especially his son Leo. Nonetheless she is absolutely worth following.

Does your website have a contact page? I'm having a tough time locating it but, I'd lke to shoot you an email. I've got some creative ideas foor your blog...

Thanks. I've learnt a lot as a beginner.